Finding Love in the Eyes of a Horse 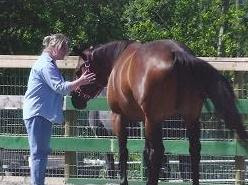 There are times in my life when healing has been hard won; through years of counselling, personal growth work, and/or the school of hard knocks. And then there are, what my friend Pat calls, “God shots.” Those moments of healing that happen with such exquisite timing and perfection, that we could not possibly humanly orchestrate them. They are delivered to us as a gift.

I received such a gift through two horses; a majestic Freisian stallion named Nyk, and a wise Quarterhorse mare named Indy. My introduction to these spirit guides came about because I headed to a farm one sunny summer afternoon to support friends in the launch of their new business. They were using the human-horse connection to help people heal. My feelings about horses had swung between two polarities; awe and extreme fear. The awe was inspired by their size, their majesty, and their connection to Source. The fear was a lingering misperception from a childhood horse experience. I really didn’t know anything about horses but my soul had called me to be at the farm that day to help me see them through new eyes.

The miracle began at the round pen where they had just turned out Nyk. I stood leaning on the boards watching this magnificent creature run freely around the ring, with flowing mane and tail flying in the wind. Before I knew it the tears were streaming down my face. Time stood still as I was drawn into Nyk’s spell. He was unabashedly being all of who he was, throughout every fibre of his being. Nothing else existed for me in that moment but a heart and soul connection with a living breathing example of grace.

Then I volunteered for a session of equine guided healing because I hoped to find a way to overcome my fear of horses. I was asked to think of a question that I wanted the horses’ help in answering. My question was, “How do I learn to love myself more?” We went to the barn and visited with each horse. I was told that the horse that was meant to work with me would come forward. I was sceptical, to say the least. Imagine my surprise when I got to the third stall, and Indy came right up to me and put her nose on my nose. My teacher had chosen me.

Indy and I joined each other in the round pen. She was untethered, and I was told that I could do whatever I was called to do. There was no agenda. “What do you mean there are no instructions?” I thought. Panic started to set in. I was used to having a game plan; a list of things to do. Indy wandered around exploring and I allowed myself to move beyond my fear and walk beside her. I talked, she listened. I moved closer, she stood still. She moved, I moved with her. We became partners in an otherworldly dance, to music only she and I could hear. Time became irrelevant. When we were done we had ended up face to face. I was holding Indy’s face in my hands as we looked into each other’s eyes. My fear had vanished. The tears rolled down my face as she passed on her answer to my question…She told me, “You don’t have to do…just be.”

Posted by Unknown at 1:35 PM No comments: